All cinemas are not the same 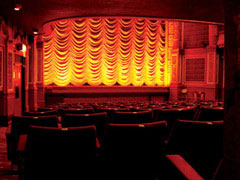 In an increasingly homogenised world of Medium Density Fibreboard and plastic-furnishings you are forgiven for thinking that one cinema kinda merges into another and it's the film you've come to see, so who cares where you see it...

Well yes, in part you're correct - you have come to see the film - you'd be a bit of a weirdo if you went to the cinema just to stare at the chairs - even if they are upholstered in finest Austrian velvet.

But it stands that all cinemas are not the same.

London is home to some of the country's best loved venues to take in a movie - whether it's a cinema with heritage and history, has an A-list clientele or, indeed, home to an attendant gallery playing host to regular sing-a-longs and a cocktail list which would put some West End bars to shame... they're all here in our Best London Cinemas guide.

If you’re not from Hammersmith then journeying to the Riverside Studios might seem like a bit of a drag, however, if you make the trip then good things await you. Screening recent, if not brand new releases, whoever curates each season allows film fans to enjoy the obscure alongside the indie ‘blockbuster’. Single bills generally play during the day and double bills start from 6.30pm. If you ever wish your life were a little more ‘Hollywood’, then four hours submerged in here is just the tonic.

You cannot ignore the sheer mass of cinema that the Odeon represents in Leicester Square. It is a behemoth structure, oozing with class – and that’s before taking into account the numbers of A-List movie stars who have graced its red carpet. Go along, enjoy the leopard print seats and indulge in good old-fashioned popcorn and pop.

The Prince Charles also has a soft spot for the double-bill, although you’re much more likely to stumble on a couple of slasher flicks paired together than an art house duet. The website has a quote from Tarantino calling it his ‘favourite UK Grindhouse’ and that’s pretty much exactly what it is. Classic movies, sing-alongs, quote-alongs, Q&As and cheap tickets all play their part in making it central London’s most exciting cinema.

Everyman Screen on the Green

Once a venue hosting the likes of the Sex Pistols and The Clash, The Screen on the Green is now a bona fide Islington icon. The neon light is part of the cityscape calling out every time one passes Upper Street. The usual luxury of an Everyman Cinema is afforded to customers, which means large comfortable seating, well curated events and considered food and drink.

Dating back to 1898, Notting Hill’s, Coronet, is an oldie but goldie. First a Victorian theatre and then a cinema – it’s taken a punishing throughout the years what with popcorn and whatever Victorian theatre audiences would nonchalantly stomp into the carpet. Two screens with tiered seating and a no frills charm. Say what you want about its need of a refurb but we’ll only throw the phrase ‘tatty finesse’ back in your face – along with a load of peanut M&Ms. It’s cheap too!

If you’re the type of person who never lets a trek east get in the way of an architecturally extreme cinema experience, then choose the Rio in Dalston. Both the art deco interior and exterior have remained largely intact since they were purpose built in the early 1900’s. ‘They don’t make ‘em like this anymore’. Indeed they don’t, and you won’t find a double bill for £9 on a Sunday in many places either. Programming consists of art house, indie, cult and classic matinees along with new releases and hip events. 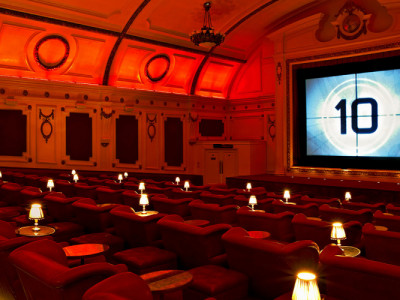 The Electric Cinema is the sister cinema to the Aubin, which makes sense seeing as it is every bit as luxurious. Films are number one but their importance is followed closely by ‘the experience’ as a whole. Gourmet foods, a Pizza East tie-in and sumptuous sofas laid on for comfortable viewing. 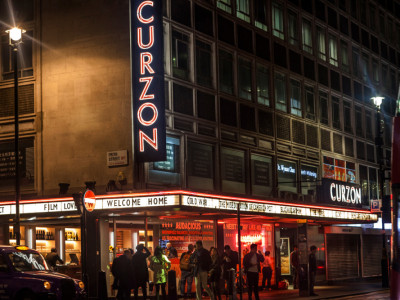 At the Curzon you get what you pay for and seeing as you pay a lot to watch films there, it’s just as well. From the café to the dim, unctuous interior, it is the refined choice to take for a film.

Hackney Picturehouse will win over the staunchest believer in classic cinemas. Its state of the art seats are upholstered in deluxe towelling, which renders the warmth of a partner unnecessary. It’s soft, comforting and it never gets clammy. Then there are the screens (massive), the drinks (bucket of Coke or beer) and the food (high-end chocolate raisins). It’s the best thing since ice cream.