Grab a pint and soak up the craic 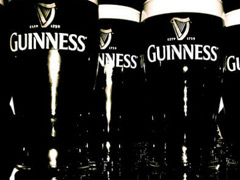 We're probably preaching to the choir a bit here... Everyone steps into an Irish bar at least once a year - March 17th to be exact - so we all know that it's a top venue to down a pint of the black stuff, shout excitedly at friends, sing loudly (and badly) and generally revel in the craic.

But if you only step through those doors once a year, you're missing out - because it's like that pretty much every night of the week. If you're looking for the loudest, most irreverent, spirited, informal venue in any city - it's nearly always the Irish Bar. Luckily for you - London has plenty from which to choose.

From bars showcasing everything from great ales and live music to stonkin' big trees growing through the middle of them - you'll find rich pickings in our Best Irish Bars list... 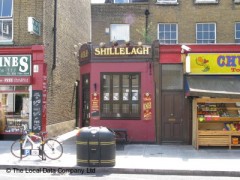 No, it’s not pronounced A-old Shil-al-aG, it’s Irish and as authentic an Irish pub as they come. That means that beyond the usual ability to serve Guinness and Jameson’s Whisky there are regular Celtic folk nights and an atmosphere that is the pure epitome of some rather excellent craic. 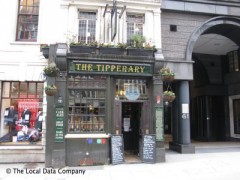 An Irish pub on Fleet Street, The Tipperary is one of those London public houses with a history. Having stood since 1700, many of the original fittings remain and despite a name change after the War not a lot has changed, despite brewery takeovers. It was famously one of the first, if not <i>the</i> first pubs in London to serve Guinness – a fact that may or may not tempt you towards its homely quarters depending on your fondness for history. 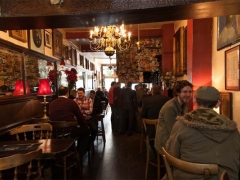 The Harp is one of those central London pubs that haven’t bowed to tourists, which we think might be a reason for its success. Run by an Irish landlady who keeps it as local as a local despite its central location, it has won CAMRA awards (best West London Pub 2012) and offers true authenticity. 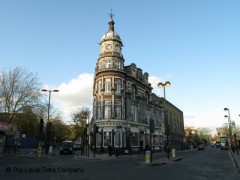 Anybody who knows Tufnell Park should know the Boston Arms. On occasions it can fall somewhere between scary and petrifying but that’s just on occasions. At other times it is one of the finest places in the area for football watching, old-school pub atmosphere and Irish pub excellence. And there’s a bonus in the way of live venue The Dome upstairs. 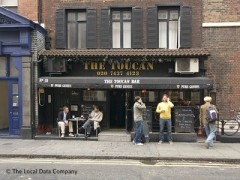 It’s painted black like a pint of Guinness for goodness sake, it has to be one of the best Irish pubs in London, right? Riiight?! And yes it is. Located just off of Soho Square, The Toucan does an impressive Irish stew, serves an excellent pint of the black stuff and keeps a huge stock of those legendary Guinness hats behind the bar. And that’s enough in our opinion. 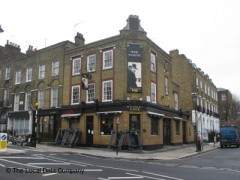 Certainly Filthy McNasty is an unusual name and we’re not sure whether anybody going by that moniker actually resides there but what the hey, it sure is a lot of fun. Bathed in dim light at all times, it always seems like whisky time at Filthy’s place and that’s appropriate because there is a huge range of Irish labels available. It also has some history as a rock n roll pub – having once been part owned by Pogues chief, Shane McGowan. 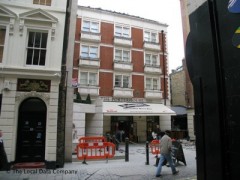 The Porterhouse is a monstrous Irish pub in the south end of Covent Garden. Supplied by its own brewery back in Dublin and with sister pubs in the Irish Capital and New York City, it’s international. You’ll find live music most nights, events every weekend and a vast array of draught beers and whisky. 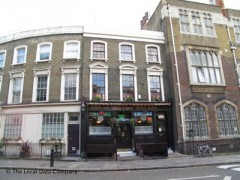 Located in well-heeled Notting Hill, The Cow takes a rather swish approach to being an Irish pub. A menu worth travelling for, good oysters and a fine Sunday roast. Guinness posters adorn some of the walls but this is a classy affair and the Irish thing is merely an influence rather than something that takes over the place. 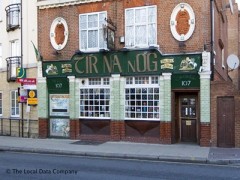 With a mythological name that has something to do with the land of eternal youth, the Tir Na Nog is Wandsworth’s most famous Irish pub. Owned by a small Irish family, it relies on its authentic roots and traditional approach. There’s a pool table, good Irish music, football and one of the most welcoming atmospheres around. 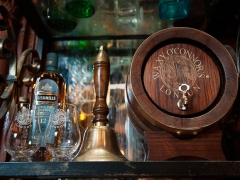 Waxy O’Connors is a central London legend and there surely aren’t many who can claim to have escaped its charms. It’s big, Irish and always full, which makes it a lot of fun, a lot of the time. Live music most nights of the week, multiple bars and a tree growing through the middle of it. Strange but true.