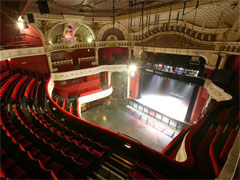 The Shepherds Bush Empire was designed and built by renowned architect Frank Matcham. Built for Oswald Stoll, the Shephards Bush Empire first opened its doors in August 1903 for a performance by the Fred Karno Troupe and remains the flagship of the 02 variety venues that exist today. The Empire enjoyed early success as a venue for the popular variety show of the early twentieth century. In September 1953 the Shepherds Bush Empire was sold to the BBC. Work immediately began on converting the building into a television studio and broadcasting theatre. One of the first shows to be broadcast live from the Empire was ‘Variety Parade’ with Max Bygraves and the ‘Tiller Girls’.

Over the next forty years the venue played a significant part in the history of British television. Shows such as ‘Crackerjack’, ‘Hancock’ and ‘The Old Grey Whistle Test’ were broadcast from the Shepherds Bush Empire. Live music concerts also played the Empire including The Kinks, Eric Clapton and Duran Duran.
The Empire changed hands again in 1995, with Break For The Border Group PLC purchasing the venue from owner Andrew Marler.

The entire building underwent a two million pound refurbishment and refit almost immediately, emerging as a premier Rock venue. The Rock giants ‘Soundgarden’ were the first act to perform at the Shepherds Bush Empire under the new era. ‘Radiohead’, ‘The Charlatans’ and ‘Blur’ all played at the Empire leading it to be honoured by Music Week as ‘UK venue of the year' during 1996. As well as hosting concerts, many live television events have been broadcast from the Empire including Comic Relief and many prestigious awards ceremonies.

In recent years the Shepherds Bush Empire has staged virtually every significant band of the modern age and has firmly cemented its place as one of the most important and spectacular music venues on the planet.