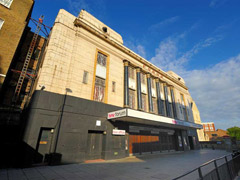 02 Forum is one of London’s major live entertainment venues. It is located in Kentish Town, North London and is one of the UK’s best-preserved original theatres.

The Forum was originally built as an art deco cinema in 1934 by Herbert Yapp, a cinema magnate who also owned the Forum cinemas in Ealing and Fulham. The architect was J. Stanley Beard and the interior design was by his partner W.R. Bennett.

The Forum was launched with a grand opening ceremony of music and films, on 17th December 1934. After going through other owners and names over the following decades, the venue was bought in 1993 by The Mean Fiddler Music Group (now called Festival Republic) and was returned to its original name the London Forum. It also became a Grade II Listed building.

In 2007, The Forum was purchased by the MAMA Group, a UK based entertainment company, who spent £1.5 million refurbishing it. It still has standing downstairs but now boasts a fully seated option as well as a new pa and light system. The refurbishment also created a new bar and increased the capacity to 2350.

In 2009 MAMA Group entered into a joint venture with HMV to jointly run 11 live music venues across the UK, including the Kentish Town Forum, the Hammersmith Apollo and the Jazz Cafe. Hence, the venue became known as the HMV Forum.

More recently, 02 has taken over the joint venture, explaining the name change. Despite the changes made to the name and the venue, it has remained one of most well-known places to play in London and continues to host some of the most popular acts in music.