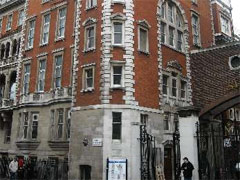 Alexander Fleming discovered Penicillin in a basic and under funded laboratory at St. Mary's Hospital in 1928- yet there are few lives that have not been touched by this colossal discovery. This laboratory is now part of the Alexander Fleming Museum and visitors are invited to tour the site of this momentous discovery. In 1999 the museum was designated a Historic Chemical Landmark by the Royal Society of Chemistry and American chemical Society. Visitors to the museum are taken back to a time without antibiotics, when the smallest infection could lead to death. A recreation of the experiment that Fleming accidentally contaminated and from which the antibacterial powers of Penicillin were discovered is also on show. The Museum also chronicles Fleming's development of the drug and its use in modern medicine. Amongst the science and experiments are exhibits about Fleming himself and his realisation and commitment to the further development of his discoveries. The Alexander Fleming Museum requires a small admission fee but is as educational as it is fascinating. St. Mary's is a working hospital and welcomes genuine researchers who wish to take advantage of its extensive research records.