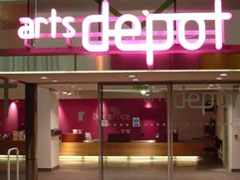 The Artsdepot was conceived during a conference called Barnet 2000 in 1996. The purpose of the conference was to ask the residents of Barnet what they would like to add to their community in the coming years. The decision was made that the only Arts centre in Barnet, the Bull Arts Centre, was insufficient for a borough the size of Barnet. The Bull Arts Centre Director Alison Duthie and developers Taylor Woodrow began to instigate the project the same year. The site of the former Gaumont Cinema was chosen for the project. In 1999 Chris Baldwin- a specialist theatre designer- and architect John Thornbury were appointed to design the development that would include the Artsdepot with performance and exhibition facilities. The Secretary of State for Culture, Tessa Jowell, officially launched the project in 2001. It was then that the name Artsdepot was announced. Work began on the actual construction of the project that same year. In 2003 the official "Topping Out" ceremony signalled the end of construction. Miranda Richardson, patron of the Artsdepot, skimmed the concrete from the final brick during the celebrations. A lucky Yew tree was circled by the construction crane in a symbolic act of to wish good fortune to the project. A community open day was attended by 2,500 people in 2004 to mark the official opening of the Artsdepot. The first season has been met with critical acclaim and many sold out performances. 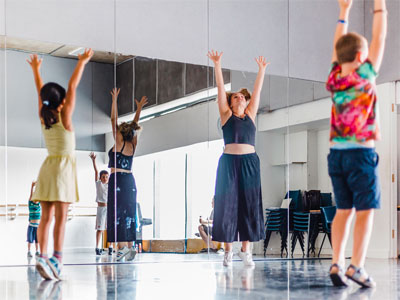 Arty goodness crammed into one space

We love this!
Book a live performance for someone shielding

Attend a virtual wine tasting
Sign up for the latest
Sign up to our newsletter for the latest and greatest from London!
By entering your email address you agree to our Terms of Use and Privacy Policy and consent to receive email updates and newsletters from All In London. You can unsubscribe at any time.