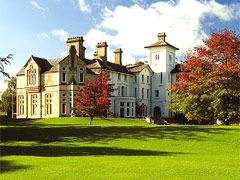 This Grade II listed Victorian mansion, was originally owned by the Bishop of London but was given to the Knights Templars in 1243. From 1312 Avenue House was owned by the Knights Hospitallers but then Henry VIII took over their estates in 1540. It changed owners several times and was eventually bought by Thomas Allen 1732.

Rev. Edward Cooper, a member of the original Allen family, built his villa on the site in 1859. It later became known as Avenue House. Henry Charles Stephens, the son of the inventor of the blue-black ink, bought the villa in 1874. When he died in 1918, Avenue House was given to the people of Finchley. The grounds that surround Avenue House were designed by Robert Marnock, a famous landscape gardener of the time.
Roughly ten years after Stephen’s death, Avenue House was officially opened to the public and has since become home to a number of clubs and societies. It also is an important local facility for community meetings and similar events.

After a fire in 1989, the building was extensively refurbished. Still retaining its original character, Avenue House now provides modern, comfortable facilities for conferences, business functions or family gatherings such as weddings.