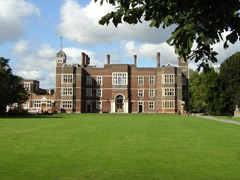 This grand, red brick house is the best-preserved Jacobean building in London, however it wasn’t built for a royal, but rather for the tutor of Prince Henry, son of James I. Originally constructed in the early 17th century, it was used as a hospital during World War I, and parts of it had to be rebuilt after heavy bombing during World War II. Nowadays it operates as a community centre, with an exhibition space, a library, a toy library for kids, and a Japanese language school. The walled gardens surrounding the house have been restored to their original appearance; one of its most striking features is the Ha Ha, a ditch that was created to prevent cattle wandering into the grounds.