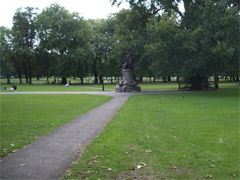 Directly next to the tube station, Clapham Common is all things to all people. A wild and rugged parkland to some, a sports venue to others and a well maintained local green to most of the remainder! This variety across the Common is its appeal. Parts of it have been left largely to nature so that local species can flourish there, other areas by contrast are well-pruned and kept by the gardeners such that they rival the best of the central London parks. Take a walk along one of the many criss-crossing paths to see all the beauty of Clapham Common.

Far from only being a local green, the Common also acts as a community centre, bringing people together for various events and occasions. To date there have been annual firework displays on bonfire night, open air cinemas in the summer, and big-name concerts to which everyone is invited. Even on a daily basis, there are tennis courts, the popular Windmill pub with its summer beer garden, and the cafe in the middle of the common all of which serve to attract people onto the green.