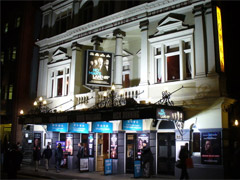 The Duke of York Theatre opened in 1892, originally called the Trafalgar Square Theatre, before changing its name in recognition of King George V. It was specifically built for the playwright and actor Frank Wyatt and his wife Violet Melnotte, who owned the theatre until she died in 1935. It originally had a capacity of 900 seats over four levels, however today it has a more intimate size, with just 640 seats.

The theatre hosted operas and musical comedies to begin with such as ‘Madame Butterfly’ and ‘Go Bang’, one of its earliest successes. Other popular productions included ‘Peter Pan’, ‘Death and the Maiden’ and ‘The Rocky Horror Picture Show’; more recently serious dramatic plays such as ‘Under the Blue Sky’ with Francesca Annis and Arthur Miller’s ‘A View From the Bridge’ have been staged.

The building had to close between 1940 and 1943 due to damage that occurred during World War II, and became Grade II listed in 1960. After a stint under the ownership of Capital Radio the theatre now belongs to the Ambassador Group; the site also serves as their headquarters.