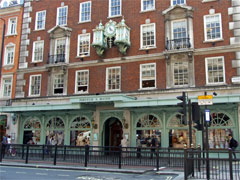 William Fortnum became a footman in the Royal Palace of Queen Anne in 1707. Mr Fortnum ran a small grocery business in addition to working at the palace. Fortnum raised some cash by selling the queen's used candles to the ladies of the palace and convinced his landlord, Hugh Mason, to help start a new business.

‘Fortnum and Mason’ was opened in Piccadilly. Fortnum used his position at the Palace to attract customers, and the store flourished. Mason also established Mason's Stables on Duke Street.

William Fortnum’s grandson Charles, went into the service of Queen Anne in 1761. Once again the connection with the Palace brought business to Fortnum and Mason which continued to grow and increase profits. The Napoleonic wars saw many servicemen order Fortnum and Mason supplies, proving another massive boost to business. Fortnum and Mason’s ready prepared meals became extremely popular under the reign of Queen Victoria. The rich Royal tradition allowed Fortnum and Mason to display the Royal seal of approval on many of its products.

In 1964 the Fortnum and Mason store built a huge clock complete with chimes, and replicas of the original William Fortnum and Hugh Masons bowing to each other. The clock weighs more than four tonnes!

Fortnum and Mason now have a reputation for selling the finest luxury goods and sparing no expense to bring quality to those who can afford it. 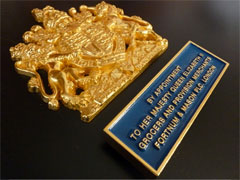 All these London businesses have the Royal seal of approval

The Harrods of grocery stores, Fortnum & Mason was given both the Queen and Prince Charles' exclusive stamp in 1955. Fun fact: they claim to have invented the Scotch egg. Although the Queen is known to stick to a super healthy diet of grilled meats and no carbs at dinnertime (she has reached the age of 90, after all), this is her go-to store for the eggy treats.