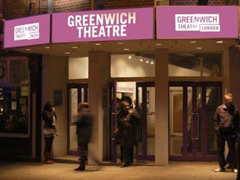 Greenwich Theatre has a long and varied history. It began life over 150 years ago as the Rose and Crown Music Hall. After renaming it Crowders Music Hall, its second owner Charles Crowder was fined for staging plays illegally, however the theatre continued to show burlesque, ballet and more for many years. In 1924 it lost its live licence and became a cinema, later bomb damage during World War II meant it had to close down, remaining empty till 1969. Since re-opening, plays by Shakespeare, Beckett and Checkhov among many other illustrious names have been performed here. As of 2010 the theatre has been producing new shows too, and they are particularly favourable towards emerging companies rather than established ones. The theatre has a capacity for 400 people, and booking lines are open 24 hours a day. Oscar-winning actress Dame Helen Mirren became a patron in 2013.