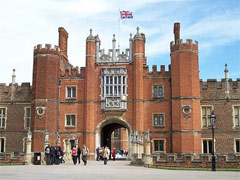 Hampton Court Palace boasts more than five hundred years of Royal History. The 550 acres of gardens and deer-inhabited parkland are free of charge to enter and make a spectacular visit alone. The Palace itself was residence to Archbishop of York Thomas Wolsey in 1514 and was later the residence of King Henry VIII.
In 1604 James I presided over the Hampton Court Conference which led to the James I version of the Bible- the most widely recognized version to this day.

The spectacular Palace is a regular venue for exhibitions and concerts including high-profile music concerts, the Hampton Court Flower Show and Shakespeare’s most celebrated plays which the Globe Theatre Company has staged there in the past. Within the Palace is a permanent exhibition documenting the history of the house and grounds.

Sir Christopher Wren designed a baroque landscape with many lakes; the most impressive of which is the Pond Garden, a sunken water garden built from the designs of Henry VIII. Running alongside the Thames is a spectacular man-made lake known as the Long Water. In the Victorian Garden is the world famous Hampton Court maze; an immaculate and vast maze featured in many television programmes and feature films. In 1786 Capability Brown planted the Great Vine, which is the oldest grape vine in the world! The vine still produces grapes which are sold to the public to this day. 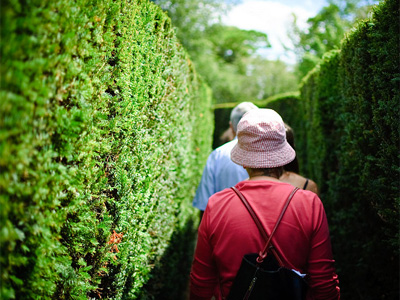 Lose yourself in a maze

Everyone enters a maze thinking 'this should only take 5 minutes'. Good luck with that...