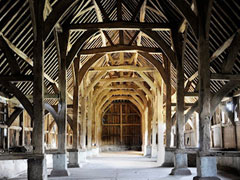 This barn on the edge of the historical village of Harmondsworth was used as a granary store for cereal crops for 500 years, until a fire broke out in 1972. Some of the exterior needed replacing, but the impressive, original medieval timbers remain in fantastic condition, and this is still one of the biggest barns to have ever been built in Britain. Although construction finished in 1427, its design was way ahead of its time, and even influenced the work of the great architect Sir Gilbert Scott in the 19th century.

Inside, the oak towers that hold up the roof resemble the interior of a church,inspiring the poet John Betjemen to call it the “cathedral of Middlesex.” It is now open to the public free of charge, two Sundays every month.