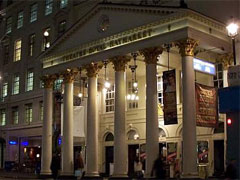 Designed by the celebrated architect John Nash and first opened in 1821, the Haymarket Theatre Royal boasts a capacity of more than nine hundred across three levels. There has been a theatre in this area since 1720, the original venue being known as Little Theatre in the Haymarket, the theatre was bestowed with a Royal Patent in 1766.

John Nash’s building was designed so that its Corinthian portico could easily be seen from St. James Square. The theatre auditorium was rebuilt in 1879 and this rebuild saw the pit, the area provided for audiences to stand, replaced by more expensive stalls seating, much to the protest of regular audience members.

In 1905 the auditorium was completely rebuilt again, and it is this layout that survives today. During WWII a large bar area was built underneath the stalls seating. A full refurbishment of the building was carried out in 1994 at a cost of more than £1.3 million.

The Haymarket Theatre Royal was the venue for the premier of Oscar Wilde’s ‘An Ideal Husband’ and ‘A Woman of No Importance.’ The reputation for producing quality productions continues through to today, with some of the world finest and most celebrated actors and actresses treading the boards at the Haymarket.