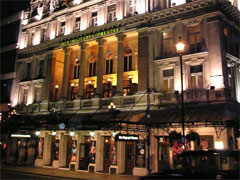 The current theatre is actually the fourth to occupy the site. Like the Savoy Theatre, the design is the vision of architect C.J. Phipps.
The original theatre was built by Sir John Vanbrugh and originally named The Queens Theatre. Opened in 1705, the venue was renamed The King's Theatre upon George I's ascension to the throne in 1714. From this period until the end of the 1700’s the theatre was most often associated with Opera performances. In 1789 the theatre was destroyed by fire.
The theatre took two years to rebuild under the supervision of acclaimed architect Michael Novosielski. The restored theatre continued to stage opera and also ballet performances, which were extremely popular at the end of the eighteenth century.
Mozart’s first operas in London were performed at the Kings Theatre. The royal architect John Nash added facades to the building during the nineteenth century. The Theatre was once again destroyed by fire in 1867.
The third incarnation was built by Charles Lee and once again was a popular venue for opera. The theatre was demolished in 1892.

The current building was first opened in 1897 and has a capacity of more than twelve hundred across four tiers. The Theatre still stages occasional operas, though is now more accustomed to staging plays.

The name ‘Her Majesty’s Theatre’ was changed such that it wasn't dependent on who was the current monarch.

Since 1986 The Phantom of the Opera has been showing at her Majesty's Theatre, making it one of the longest-running shows in the West End.