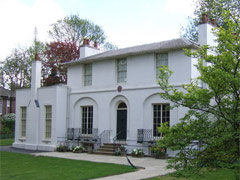 Keats House in Hampstead, is the former home of poet John Keats (he lived there from 1818 to 1820) and is generally believed to be the place which inspired some of Keats’s most memorable poetry.
The house was built in 1814/1815, and was originally a pair of semi-detached houses known as "Wentworth Place". Here, Keats‘ Ode to a Nightingale' was written, and whilst living there, he also fell in love with Fanny Brawne, the girl next door. Aged 25, Keats suffered from tuberculosis and had to move to a warmer climate, so in 1820 he left London and died in Italy the following year. The two houses were merged in 1838–39 and were under continuous occupation until the 20th century, when Wentworth Place was threatened with demolition, but was saved by subscription and opened to the public in 1925 as the Keats Memorial House.