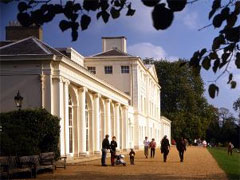 It is not known for certain when Kenwood House was first built, but we do know it dates back to at least 1616, when the printer for King James I lived here. The Orangery was added to the rear of the building in around 1700; Kenwood is also well known for being home topaintings by masters including Rembrandt, Gainsborough and Turner.

In 1754 Kenwood House was bought by William Murray, the 1st Earl of Mansfield. He got architect Robert Adam to remodel it, adding the library and the iconic portico at the entrance. More recently, in November 2013 the house re-opened following a £5 million refurb, during which the rooms were redesigned to represent the different periods of the building’s history. Aside from the collection of paintings and furniture (all cared for by English Heritage, as is the house), there are 74 acres of gardens to explore too.