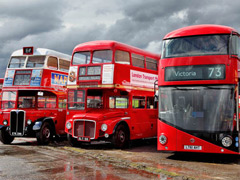 It’s located a train ride away from the capital, but the London Bus Museum has a collection of London buses that date from the 1870s – the days of horse-drawn buses – up to the 1970s. Most are in working order and get used in film and on TV, and of the 30 that are on display at any one time there is usually one that can be boarded. Some exhibits consist of just the chassis of models from the 1920s, 30s and 40s, which will be of interest to automobile enthusiasts.

The museum is run by a charitable trust and they devote part of their funding to restoring old buses to be exhibited. The charity has its origins in a 1929 parade to commemorate bus services, after which some of the buses used in the parade were kept aside. The current London Bus Preservation Group was founded in 1966, and they opened the London Bus Museum in 1972.