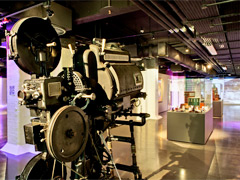 The London Film Museum began life as an exhibition dedicated to Star Wars, curated by Jonathan Sands. Much of the collection was owned by Sands, and the success of the show led him to finding a permanent home for it. The first London Film Museum opened in the County Hall building in 2008, initially called \“The Movieum\”. The Covent Garden venue is the second branch (opened in April 2012), occupying the old Flower Cellars after an expensive refurb. Temporary exhibitions honour legends like Charlie Chaplin, with numerous still images from celebrated movies, while recognisable film props stand alongside interactive displays and life-size figures of Batman and other characters. There is a coffee shop on site with newspapers and free wi-fi, as well as a bookshop. Entry is free, however an up-to-the-minute interactive iPad tour (you use the museum’s own iPads to download info as you walk around) is a fiver.