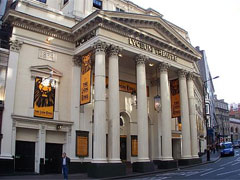 Situated on Wellington Street, the Lyceum Theatre has a capacity of more than 2000. There has been a Lyceum Theatre in the area since 1772 but the first incarnation of the Lyceum on its present site was built in 1834 by Samuel Beazley. In 1882 C.J. Phipps, the designer of the Savoy Theatre, reconditioned the theatre and in 1884 adjusted and improved the circles.

The Lyceum Theatre was owned during it early years by celebrated actor Sir Henry Irvin and the theatre and Irvin became strongly associated. Irvin’s last performance at the Lyceum occurred in 1902.

The LCC bought the Theatre in 1939 to be demolished to make way for a new road; this was thankfully abandoned. The building was leased out and became a ballroom during the middle of the twentieth century. Because the Lyceum was no longer a theatre, despite it historical significance, the building and its future became uncertain.

The Lyceum Theatre was reopened in 1996 and became the home for many modern musicals. The main stage had to be completely rebuilt because the previous one was a mismatched combination that had evolved from the many builds and rebuilds over the years. Samuel Beazley’s façade and portico survive today, and are a familiar and striking view from Wellington Street.