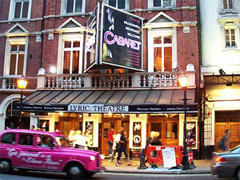 The Lyric Theatre on Shaftesbury Avenue (not to be confused with the Lyric in Hammersmith) opened in 1888. The theatre was built on the site of a house, and the exterior still retains the original windows and balcony. The Windmill Street side has a blue plaque on the wall to mark indicate it was once someone’s private home. The Lyric was the second theatre to be built on Shaftesbury Avenue and is the oldest standing theatre on the street today. It currently seats 967 on four different levels. The building was deemed Grade II listed in 1960.

The iron curtain is operated by water, something which was not unusual in the 19th century but which isn’t the norm today. Previously water would be pumped from the Thames around the West End to operate machinery, today an electric pump is used at the Lyric but it is still a labour intensive and slow process. In its early days the Lyric hosted light operas and comedies. In recent years dramatic works such as Arthur Miller’s ‘Death of a Salesman’ and popular musicals such as ‘Hairspray’ have been staged.