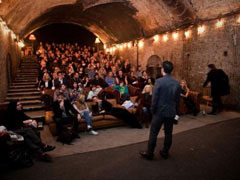 In 2010 the Old Vic Theatre decided to put the disused vaults underneath Waterloo station to good use, transforming them into a multipurpose arts venue. It’s no wonder – industrial chic is still all the rage, and the subterranean arches add bags of atmosphere to any event.As with the Old Vic Theatre, the artistic director is Kevin Spacey, and the five tunnels host live music, theatre, film screenings (the UK premiere of Banksy’s ‘Exit Through the Gift Shop’ took place here), cabaret, exhibitions, and more unusual events such as when graphic novelist Alan Moore did a reading of his latest story with the backing of a live band. Around 850 people can fit in the 30,000 square foot venue, which is also available for private hire; they’ve previously hosted product launches and industry parties, as well as a fundraiser organised by former US president Bill Clinton, a personal friend of Spacey. In February 2011 the Old Vic Tunnels Theatre was presented with the Prime Minister’s Big Society Award, recognising their volunteer scheme for 16-25 year olds.