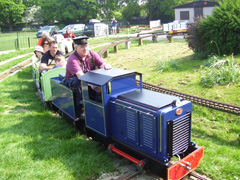 Ridgeway Park in leafy Chingford is home to the Chingford & District Model Engineering Club, where members of the public can ride on the railway on Sundays throughout the summer months. The club has been going for over 60 years – in 1954 Walt Disney, who was a miniature railway enthusiast, heard about the club and asked to be taken there, where he spent a day riding the trains and having his photo taken by the press. This coincided with Chingford Day, which took place every year in the park, but as seeing Walt Disney sitting astride a diminutive train was more interesting to the attendees the Mayor was left to honour the festivities on his own.

The park has formal flower beds and grassy areas; in terms of amenities there are tennis courts, table tennis facilities, a putting green and petanque, and children’s play areas.

Win An award-winning takeaway for two from Chilli Tuk Tuk!
Sign up for the latest
Sign up to our newsletter for the latest and greatest from London!
By entering your email address you agree to our Terms of Use and Privacy Policy and consent to receive email updates and newsletters from All In London. You can unsubscribe at any time.