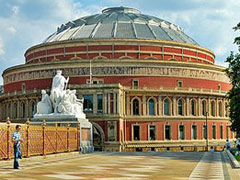 The Royal Albert Hall was first opened in 1871 and has remained central to London's culture ever since. The hall was built for the advancement of science and the Arts and was named after the late Prince Albert- who had died ten years before the halls completion. The building was funded by private individuals and help from the Crown.

The architect in charge of the project was Francis Fowke. The annual Proms season has been held here since 1941. The building is constructed from red brick and terracotta, and was designed around the amphitheatres that the prince had seen on his visits to Europe. A frieze that represents the arts and sciences circles the building. The roof of the Albert hall is made of an iron and glass dome, and offers excellent acoustics.

To date the Albert Hall is used for a variety of functions including concerts, fashion shows and corporate events. Since it first opened more than 150, 000 performances have taken place at the Royal Albert Hall. Tickets for the promenade seasons are difficult to get and must be bought in advance. The Royal Albert Hall is easily accessed via Knightsbridge or Kensington Underground Stations. 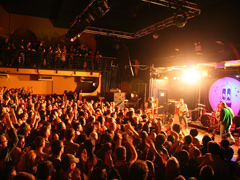 The grand dame of London concert venues, The Royal Albert Hall is a class act. All-seater and all style, there is more to the Kensington venue than the classical Proms. Contemporary artists perform from time to time so keep an eye on events listings. 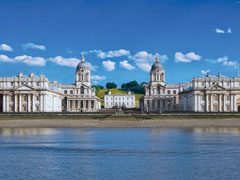 When Prince Albert came up with the idea for this concert hall he had in mind a lavish, world-class venue inspired by Roman amphitheatres that could seat 30,000. Aside from the capacity (which had to be reduced to a mere 8,000) he got his wishes, albeit posthumously, and when the Royal Albert Hall opened in 1871 it was the biggest structure of its kind in the world.A terracotta frieze that goes all the way round the building shows figures building, dancing, and engaging in other worthy activities; most spectacular is the domed glass ceiling, not the most conducive to good acoustics but a stunning example of typically Victorian iron and glass architecture.