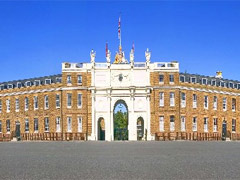 Built between 1776 and 1802 the Royal Artillery Barracks at Woolwich in South East London were the 'home' of the Royal Artillery and were used by them until July 2007. During the Olympics and the Paralympics in 2012, the shooting events will be held at the Barracks; temporary, relocatable shooting ranges will be built, that will also include temporary spectator grandstands at each Shooting range.

The indoor shooting range will be taken down after the Games, and will be relocated to shooting facilities elsewhere in the UK.

Crowds of 7,500 will be able to watch the events, which are easily accessible by mainline train and bus services.