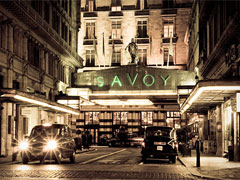 The Savoy Theatre was designed by C.J. Phipps and was first opened in 1881. Situated on the River Thames- the famous Savoy Hotel was built opposite eight years later. The Hotel and Theatre were funded almost exclusively by profits generated by Gilbert and Sullivan operettas. The main entrance was originally positioned on the Embankment but was moved in 1902 to the Savoy Court- which is shared by both the hotel and the theatre.

The Savoy frequently staged the Gilbert and Sullivan operettas during its early life that had funded the building of the theatre itself, in recent years a revival of these shows have been met with huge success.
The Savoy Theatre was the first building in the world to be lit by electric lighting. The Savoy Court is the only road in Britain where drivers are required to drive on the right-hand side of the road.
In 1903 the theatre was closed for a complete internal rebuild- overseen by architect Frank Tugwell. The rebuild took only four months and the theatre was reopened in October of 1903. In 1929, the theatre was remodelled in just 4 months, with a beautiful, 'modern' theatre emerging from the comprehensive rebuild.

A huge fire swept through the Savoy Theatre in 1990, causing extensive damage, though no lives were lost and the neighbouring Savoy Hotel escaped unscathed. The responsibility of rebuilding the theatre fell to architect Sir William Whitfield who remained faithful to Tugwell’s Art Deco creation. The theatre was reopened in 1993 by HRH the Princess of Wales.