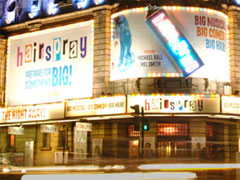 When it was first opened in 1911 the Shaftesbury Theatre was known as the New Prince’s Theatre. Designed by architect Bertie Crewe, the designer behind the Hippodrome music hall, the venue holds more than thirteen hundred people across three levels.

The Theatre was sold to E.M.I. in 1962. The company redecorated and restored the building and it was reopened to the public in 1963 with its new name, the Shaftesbury Theatre. In 1973 parts of the theatre ceiling collapsed and halted the production of ‘Hair’, the then brand new musical. ‘Hair’ was arguably the most risqué production due to the musicals nude scenes, performed only weeks after the theatre censorship standards were changed. The Shaftesbury was named as a proposed site for redevelopment, but a spirited local protest and the subsequent listing of the building by the government in 1974, meant that the Shaftesbury Theatre was saved and reopened in the same year.

The Shaftesbury Theatre was more recently refurbished in 1986. The venue has hosted productions as varied as ‘West Side Story’,‘the Kiss of Spiderwoman’ and 'Hairspray', and continues as a highly successful theatre today.