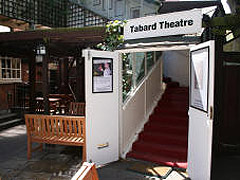 The Tabard Theatre is an intimate, 80-seat studio theatre situated above the Tabard Pub in Turnham Green, West London. In addition to in-house productions, the Tabard Theatre also presents one night comedy gigs and other entertainment and has become known as a forum for new writers and artists. It can be hired for workshops, rehearsals, presentations and other functions.

When opened on 1985, the Tabard Theatre had a strong reputation for new writing. Today, it still has that reputation but it also hosts all kinds of live entertainment from experimental work to classic Shakespeare plays. It is widely supported by a loyal local audience as well as by visitors from all over London

Since 2005 the theatre has been undergoing major renovation works that, once completed, will have turned the theatre into one of London's best equipped and accommodating studio theatres.