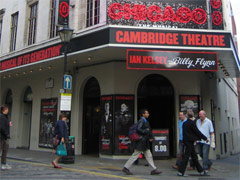 The Cambridge Theatre is a modern, striking building, located directly opposite Seven Dials. Built by architects Wimperis, Simpson and Guthrie, the Cambridge first opened its doors to the public in September 1930. The Cambridge Theatre is now a grade 2 listed building. Despite being a concrete structure, the modern look and clean lines of the architecture have created a visually pleasing venue.

In 1950 the whole building was refurbished and the colour scheme changed from silver and gold to the red which can be seen today. It was during this refit that the bold chandeliers and candelabras were added. In 1987 another (arguably more tasteful!) refit was undertaken by designer Carl Toms, restoring the quality and understated grace of the original construction.

Though the Cambridge Theatre has a capacity of more than twelve hundred and boasts superb facilities, the venue has an unfortunate reputation for short production runs. This has meant that the theatre's status has been in jeopardy in the past. During the 1930’s the Cambridge was used for trade films and was briefly a cinema during the late sixties. Despite this the Cambridge Theatre has staged some impressive and significant shows. In 1963 Tommy Steele played to packed houses with his seminal performance in ‘Half a Sixpence’. ‘Chicago’ which has recently undergone a transformation onto the movie screens starring Catherine Zeta Jones and Rene Zellweger, ran for almost six hundred performances at the Cambridge from the late 1970s.

In more recent years the Olivier award-winning musical ‘Return to the Forbidden Planet’ opened, running for more than four years. The production was based on Shakespeare’s ‘the Tempest’ and featured music from the fifties and sixties. The Cambridge Theatre has become an important and recognisable venue in the West End and continues to stage major productions.

Reviewed by Anonymous
A visit to the Cambrige Theatre,

The theatre is actually NOT suitable for the performance of Chicago: The musicans are on the same stage as the actors, the overall stage is extremly small. No change of the screen is possible.

Overall the worst Chicago musical set up I saw recently. Totally unuitable theatre for this type of performance.