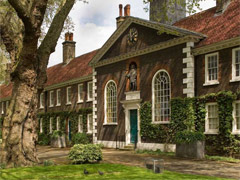 The Geffrye Museum on Kingsland Road is named after Sir Robert Geffrye, a former Lord Mayor of London and Master of the Ironmongers' Company. The Geffrye Museum offers a glimpse into the typical homes of middle class Londoners of the last few centuries. 11 rooms have been furnished with objects that date as far back as the 17th century, right up to the present day, from a 1695 parlour to a modern loft style apartment (the homes are certainly intended to be on the affluent side). The buildings that house the museum date back to the 18th century, when they were used as almshouses, however when the local area was hit by poverty these were relocated. The museum first opened in 1914, with the aim of showcasing the local furniture industry, and over the years the collection household objects and furnishings grew. Temporary exhibitions take place too; past ones have included ‘At Home in Japan’, and ‘Who Stole My Milk’, about student homes in London. The gardens, which are open between April and October, have been landscaped to match the period rooms. Admission is free.

Museum of the Order of St. John