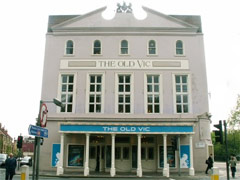 Originally named the Royal Coburg, The Old Vic Theatre was built in 1818 by architect Rudolph Cabanel. The theatre was renamed in 1833, and over the years, the handsome Georgian façade has become a recognisable and attractive London landmark. The building is now Grade II listed.

The Old Vic Theatre Company was formed here in 1914 and boasts a proud tradition of world class actors among its numbers including Laurence Olivier and Sir John Geilgud. The Old Vic was closed for nine years from 1941 to 1950 because of the Second World War. Until it moved to London’s South Bank, the National Theatre found its home at the Old Vic. Founded by Laurence Olivier in 1963 the National Theatre is widely recognised as one of the finest schools of acting in the world.

The Old Vic Theatre has suffered mixed fortunes in recent years. After being put up for sale in 1997 the theatre was bought up by the Old Vic Theatre Trust 2000; a trust set up to preserve one of London’s most historically important venues. Sir Peter Hall ran a successful series of performances in 1996, and his company put on ten plays which played a gruelling ten performances a week. The Old Vic Theatre unsuccessfully staged a revival of ‘Hair’ the musical in during the 1990s though the musical ‘Carmen Jones’ was an undeniable success around the same period.

Despite a chequered history, the Old Vic remains one of the most significant and admired theatre venues in London.