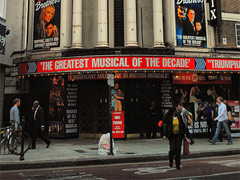 The Phoenix Theatre was built by Sir Giles Gilbert Scott, Bertie Crewe and Cecil Masey and first opened its doors in September 1930. Though unassuming and plain from the exterior, the interior of the Phoenix boasts beautiful and striking art deco furnishings and fixtures. The interior also makes judicious use of mirrors to breathtaking effect. The Phoenix Theatre’s interior was designed by famous Russian director Theodore Komisarjevsky. The entrance to the Phoenix was moved in 1970 from Charing Cross Road to Phoenix Street though the theatres box office was sandwiched between the two. A cinema was built upon a former bomb site which neighboured the Phoenix though the cinema has since been demolished to make way for a residential building.

The Phoenix Theatre has been previously associated with the flamboyant Noel Coward. Cowards comic play ‘Private Lives’ first opened here with the legendary Laurence Olivier among the prestigious class. The production later moved to Broadway where it began a hugely successful run. Coward returned in 1936 to stage a series of nine one act plays entitled ‘tonight at 8.30’. Cowards acted alongside long-term friend Gertrude Lawrence. The bar in the Phoenix Theatre was renamed in 1969, The Noel Coward Bar, in honour of their famous patron. In the same year a midnight matinee was produced in honour of Coward's 70th birthday.

In 1968 a run of more than two thousand performances of ‘The Canterbury Tales’ began to rave reviews. Tom Stoppard's ‘Night and Day’ ran here for more than two years. In 1991 Willie Russell’s musical ‘Blood Brothers’ moved to the Phoenix and ran until 2013, making it the theatre's longest running show.