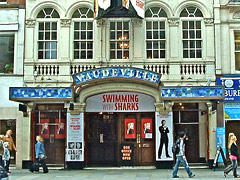 The Vaudeville Theatre was originally built to a design by C J Phipps and opened in 1870. A relatively short time later the theatre was demolished and rebuilt, once again the C J Phipps design. The theatre re-opened in January 1891. It was this rebuild that added the Portland stone frontage that stands four stories high. Just four years later the interior of the building was completely gutted and rebuilt to designs, this time, by Robert Atkins. It was during this rebuild that the original horseshoe auditorium was removed and a rectangle-shaped auditorium was installed. It is this auditorium, which reopened in 1926, that still exists today.

During the early years the Vaudeville staged mainly revues. The musical ‘Salad Days’ opened in the Vaudeville Theatre, and is still its longest ever running production, after transferring from the Bristol Old Vic and staying for an incredible 2,329 performances.

Other significant productions include Willy Russell’s play ‘Shirley Valentine’ with the excellent Pauline Collins, and Arnold Wesker’s ‘Chips with Everything.’

In more recent history the Vaudeville has been home to the musical ‘70, Girls, 70’ by Kander and Ebb. Simon Gray’s ‘Hidden Laughter’ enjoyed a successful run here, before ‘Salad Days returned to the Vaudeville in 1996, though this time only ran for four months. In 2020 'Magic Goes Wrong' began playing, from the makers of the hugely successful, 'The Play That Goes Wrong'.