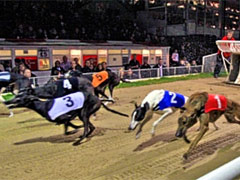 Closed
Our records show that Wimbledon Dog Track is closed.

Situated in South West London, Wimbledon Greyhound Stadium is the largest and most successful dog racing track in the country. The stadium has excellent facilities and attracts people from right across London and from all classes. The Grandstand is air conditioned and glass fronted- providing luxurious comfort for race fans. Races are held every Tuesday, Friday and Saturday and the track opens at 6.30pm. The track at Wimbledon Greyhound Stadium is 408 metres in circumference and races over 252 to 1068 metres are contested here.
Facilities include a silver service restaurant with an extensive and affordable menu. There is also another restaurant called Broadway- the atmosphere is more relaxed and the menu a little more simple. Each table is furnished with its own multi-channel television set to view the races. For the less discerning diner there is also a fast food restaurant on the premises.
For groups a corporate box can be hired- with its own betting service and fully stocked bar.
Racing takes place every fifteen minutes- which guarantees excitement and interest throughout the evening. Dog racing has been rediscovered by London’s younger generation; as a result the mix between traditional racing purists and the younger element looking for an evening’s entertainment means that Wimbledon Greyhound Stadium has a unique and vibrant atmosphere. 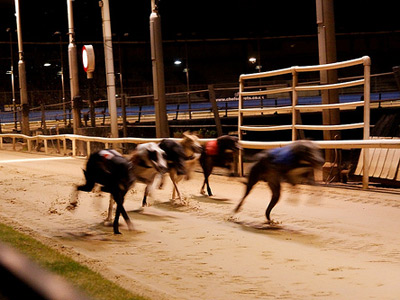 Put a couple of notes down on your four-legged friend