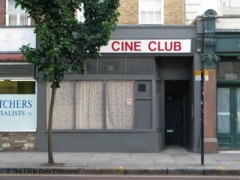 Closed
Our records show that Abcat Cine Club is closed.

Reviewed by Rob Mitchell from Portsmouth
Why is this now closed?

Once again it would appear that the Puritans have taken over - Islington Council - and deprived members of a chance to see this kind of film and enjoy a pleasant couple of hours.

It appears that in Britain we, as adults, have to be censored and restricted - yet on the Continent in any city we can be spoilt for choice. Oh dear, what a sad place we live in!

Reviewed by henrypatton
Visited with my wife last week (both mid 30s). Felt very safe, not many people around, but it was still a fun experience. Would be fun to go along with more people next time.

Reviewed by holepole
Recently visited with my gf. We had no difficulty getting into the cinema. Films were good and my gf wasn't pestered, which I thought was good but we wouldn't have minded if one or more of the guys had shown some interest in us.

Reviewed by londonvisitor2014
My girlfriend and I travelled half way across London to visit this place to be told that women can't come in. Rubbish waste of time.

Reviewed by paul from Doncaster
Awesome afternoon, going back for more in June, I hope the guy who was in last, will be there again

Reviewed by Gilly S
visited for the first time recently!
am new to this kind of cinema but was pleasantly surprised!

was met at the door by a lovely guy who made sure I knew what kind of films my boyfriend was taking me to watch.
it was very cold in the cinema but myself, my boyfriend and the other 8 or so patrons didn't seem to mind much!

had a great time enjoying watching the films with like minded ppl just having a fun time!

would I visit again?
definitely! but please put a bit of heating on!

would I recommend this place to my friends?
already done.

Reviewed by joshua from tel aviv israel
i love the place !!! sorry there are not more places in london like this one ! it's sexy and i had good time with nice people !!!!

Reviewed by James from South London
I'd love to do a good review for Abcat, but I can't. I know the place too well.

We all like a bit of spit and sawdust - BUT Abcat is just grubby and rundown, in need of a good scrub from top to bottom. The management is easygoing and pleasant enough to the punters, but they don't bother to keep the place looking smart.

The place could be a real pull, especially at lunchtimes; it should be great - for everyone: couples and/or str8 blokes (there's a gay cinema round the corner) or ladies in need of fun and maybe some bicurious experiments - but it rarely seems to be busy these days.

A great pity, and such a waste - it's in a prime place for adult entertainment (King's Cross) especially now that the area is being 'regenerated'. All those office/site/railway workers need some fun at breaktimes.

Maybe somebody with some imagination ...

We do get feedback from our customers and indeed welcome their suggestions and try to modify the programmes accordingly. You should remember that we are a small, independently-run business, one of the few left in the area, consisting of mainly part-time staff and helpers including myself, which is run on a very tight budget which accounts for the lack of fixtures and fittings. I would love to present programmes including live exotic dancers, free cocktails for the patrons and Hawaiian-themed evenings and have suggested as much to the proprietors but unfortunately a shortage of development capital restrains them from doing so.

Instead we present a competitively-priced programme of adult entertainment as well as a meeting-place for like-minded adults. We have been in business on this site with a loyal following since 1969 progressing through cine film, video and into the digital age so we have tried to keep pace with the changing times although the ambience is distinctly that of the 1950s. We would welcome new patrons to judge for themselves and not take either my or James' word for it. Whilst you are here you might like to check out &quot;Oscars&quot;, the Abcat's companion club under the same management, around the corner in Northdown Street, devoted exclusively to showing feature-length unedited gay male adult films which was opened only a few years ago and so has a much more up-to-date appearance but whatever your tastes or criticisms you will always found a warm and pleasant welcome awaiting you from us.