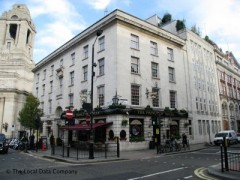 The Price Of Wales serves a variety of beers, wines and spirits as well as a selection of pub snacks.

Reviewed by Olga from London
We booked the upstairs room for a leaving do for Saturday the 1st of December. When we got there they simply told us they cancelled the reservation because a bigger group (we were 16 people) asked for the same room, of course without contacting us to let us know. We spend our leaving do evening looking for another pub. Very disappointing booking service.

Reviewed by karadog
My wife and I have been going to the Prince of Wales for pre show meals when we are in the city and have always had excellent food etc. We went again on Thursday 19th May and on our arrival most of the seating was reserved but we managed to sit with another couple from Scotland who where visiting the city. I have always had fish and chips at the Prince Of Wales and found the meal to be absolutely great but this time it was absolutely awful and I also ordered bread and butter which never arrived but all in all the fish which was served was disgusting as it was just a lump of batter and the lady from scotland said her fish was just as bad. What has happened to the excellent food? . As for most of the tables beiong reserved, the amount of people that came in and left was very many. I was offered £1 back as compensation for not getting the bread and butter I ordered and I complained about the fish but not one person offed any kind of apology except for the £1 coin which was thrown on the table. The total cost of the meals for my wife and I came to over £17 and it was money down the drain. We used to love going to this pub but I dont think we will again.

Reviewed by John Stockham from West Malling, Kent
Having read the variable reviews on this pub, my wife and I plus two friends decided to &quot;give it a try&quot; for a pre-theatre meal recently (mid-February 2011). It was already pretty full when we arrived, but we found a high-stool table. We ordered meals varying from steak and ale pie, to scampi and a chicken curry. The food arrived within ten minutes - it was hot, very tasty and the portions were large. Absolutely no complaints. We only ordered one dessert (apple pie) for my wife and I to share; it arrived within two minutes, despite the pub still being very busy. Again, a good portion, enough for two, the custard, served in a jug, was hot and creamy (not like water, as in some establishments!) and it was very tasty.

We found the staff to be friendly, helpful and very efficient. The prices for both food and drinks were no more expensive than in our part of mid Kent, so we were all pleasantly surprised by the Prince of Wales and will certainly use it again.

Reviewed by Anonymous
Called in due to the pub's proximity to the New London Theatre - had a couple of hours to kill before the show.
Good selection of ales, although they had ran out of the London Pride. Having paid for my drinks, the barkeeps then offered my change to another punter!!
Ordered meals - they'd ran out of bernaise sauce to go with the steak ... I cannot see how a well managed pub, on a Monday evening, in the center of London, can run out of things - I guess it's not well managed.
They appeared short of staff - had to clear used glasses off our table when we arrived. After our meal, a long wait before someone cleared two of the three plates - no one came back to take the third before we left!! The food, for the price was mediocre - my 'beef stew' was very anaemic in appearance - wasn't too sure if it was a leftover from the War Horse which was the play we were seeing!!! A very 'average' experience overall.

Reviewed by Anonymous
On the plus side this pub has a reasonable selection of British beers, a convenient location and is not uncomfortable. However myself and several of my colleagues have been overcharged by bar staff who have then refused to address the issue. The food we have been served has taken a long time to arrive and not offered good quality for the price. As someone who works in the area the consensus of most of my colleagues is that there are far better pubs in the area with better customer service, better food and who have bar staff who pull a far better pint.

Reviewed by Anonymous
My wife and I dropped into the Prince of Wales one evening as we passed (cask ales enticing us). Our initial thoughts were that the music would put us off, but once we sat down we found the place to be very comfortable and the music wasn't loud. There was a good selection of ales - I had 2 Adnams Broadsides, while my wife had half a London Pride. The staff were very warm, friendly, chatty and helpful. The food was OK for the price and cooked about right for us. If we'd been staying in London for a bit longer, we would have stayed there for another drink, but we decided to head back towards Russell Square and call at a pub closer to the hotel before heading for bed. We'll definitely call in there the next time we're in London - probably at lunchtime.

Reviewed by Anonymous
the pub have a great atmospher. staff are very friendly and always smiling, food is really good and great value for money. the owners are very friendly and willing to help in any way. every thing is great about this place. it would be my first choice of pubs in london when i return. well done to all

Reviewed by Anonymous
Well run pub,the staff without exception offered free smiles and are very pleasant.
Food is excellent and reasonably priced, and it was a great pint of Guiness.