the Garrison comes Michelin recommended and its menu sparkles 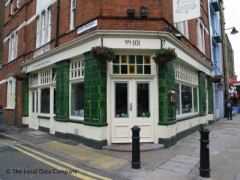 Pubs in Peckham and South London
As stylish a pub as you’re likely to find anywhere in London, The Garrison has an irresistible sheen of chic about it. The food is modern European, drinks are all continental wheat beers and microbrewery tipples and there’s even a cinema room in the basement. Bermondsey’s finest.

Chow-down on London's best fry-ups
The Garrison is first of all a pub, but it sure serves up an almighty breakfast. The difference between the fry up served here as opposed to a caf’, is immeasurable. For an English breakfast that makes you feel good about yourself is a rare thing, but a thing that The Garrison have succeeded in creating. Their ‘full and proper breakfast’ is a dish that transcends the restraints of a fry-up with its use of quality ingredients across the board.

Best places to munch a delicious Sunday roast
The Garrison on Bermondsey Street is the kind of place you might take your in-laws to show them that London isn’t the lawless hinterland they read about in the newspapers. In fact, it’s a place where Sunday Roast can match the heights of the country pub, a meal is finished with a movie and pastel shades soothe while trinkets sparkle. Yes, The Garrison is all this and more.

Most beautiful restaurants
The Garrison is decked out a little like a country cottage, albeit a tongue-in-cheek one. Stuffed animals hang from the walls gazing down on the punters, there’s mismatched furniture and plenty of knick knacks that could have been reclaimed from an elderly relative’s house. The shabby chic look really works - booking is advised as it gets very busy.

"the Garrison comes Michelin recommended and its menu sparkles"

Who knew what the residents in this area did before the Garrison turned up on their doorstep to bless them with a local that feels like something off a movie set. Actually, they probably went to one of the other two pubs nearby, but hey ho.

If you’re into pubs that take their style seriously then the Garrison is for you, its stained wood conjures the look of chic beach huts and in contrast you have the emerald tiles that add a built in gleam to the whole. It’s relaxed and informal and attracts the type of crowd that you’d expect to appreciate its look, whether that’s the hip locals, foodies or workers from nearby London Bridge and Borough. Speaking of foodies, the Garrison comes Michelin recommended and its menu sparkles with alternative concoctions that take in the likes of squid ink gnocchi, wild venison haunch steak and the famous Garrison steak sandwich. Prices are restaurant high, however the quality doesn’t disappoint. There are also duck and goose roasts on Sundays.

In terms of entertainment, the music’s carefully picked to float about and there’s the cinema lounge below that screens films and hosts overspill from above as well the occasional private event.

The only shame about the Garrison is that it can’t be everyone’s local, but then again it might be all the sweeter after a journey.