A club for people who really, really like jazz.. 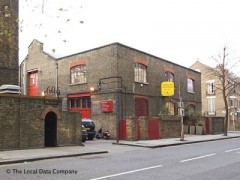 Ads by Google
About: The Award winning 606 Jazz Club has existed as a Jazz Club restaurant for more than 30 years and has a relaxed, informal atmosphere. The club is currently licensed for 165 people. Due to their licensing restrictions they only serve alcohol to non-members with a substantial meal. Booking is definitely advisable.

The 606 Jazz Club features in these AIL lists...

The best hotspots for jazz and dining
This veteran basement club south of Chelsea is for those who are serious about their love of jazz. UK performers are favoured and the entirety of the cover charge goes to them. The menu has Mediterranean and Middle Eastern dishes, all made on the premises.

Smooth: London's favourite jazz clubs
‘Welcome to one of the best Jazz clubs in Europe’, that’s the line rolled out to customers at the 606 Club and who could argue with it? The cosy basement club is as good as it comes. The club/restaurant is all about the authenticity, delivering the best British based jazz that’s out there.

London's best Blues Bars and Clubs
Since the club's inception in 1976, the owners have held a strong belief in supporting the local music scene, so to this day they still only book homegrown artists. Their relaxed atmos, food and live music seven nights a week has been so popular that they had to move to a larger venue to accomodate their fans - hence their current home in Chelsea, and their rep as one of the busiest jazz and blues clubs in Europe.

"A club for people who really, really like jazz.."

Whilst I like all sorts of music, I admit that I find jazz a bit challenging. And this is a club for people who really, really like jazz. When I went it was to join a large party of friends celebrating a birthday – and most of them go each year to the Guinness Jazz Festival over in Cork – so they are jazz nuts.

The first challenge is to find the place. Now I grew up in Fulham and thought I knew my way around. But wandering along Lots Road in the evening is not fun if you are of your own (or wearing high heels) so take a cab. It really is further along that you would think – and the famous door way is tucked away in a stretch of the road that you think is deserted. So be warned! But the upside is that you can park nearby…

Just inside the door is an ominous looking cage affair and you have to hunt for the buzzer. You feel a bit like those stupid teenagers entering somewhere you shouldn’t in one of those slasher horror movies. The door is at the top of a dark flight of dodgy looking stairs so as you descend into the depths you begin to wonder whether entering was a good idea after all.

Anyway, you pass through a small lobby affair to drop off your coats and then there is a separate (relatively small) bar area where I met my group of friends. The wines were warm and pleasant. I was drinking red so I assume they chilled the white!

After a while chatting we were moved into the main area – which is large – for our meal. The staff were super friendly and attentive enough. I don't remember the background music before the band started playing but I sure as hell heard the band once it started. That’s because I was seated so close to the drums that I could have helped with the percussion intervals. It was LOUD!

I am afraid I like structured music but I am told by my connoisseurs that the music was sublime. A blind chap called Reg Webb was supported by a dreadlocked bass player and a peroxide blond hair eyebrow-pierced drummer who looked like an escapee from the punk scene. I have to say that my admiration for that drummer grew through the evening - how on earth did he know what to drum and when during what appeared to be a number of very creative jamming sessions? He did some amazing solos that even I - as a relative jazz neophyte - had to appreciate as musical genius. The main man himself was pretty nifty on the keyboards and managed to sound - at various points - like Van Morrison, Stevie Wonder and a host of other great singers.

The food was pleasant – as members of a group we were offered two courses for £32 and I had goats cheese to start and vegetarian linguine as a main. My colleagues appeared to have chosen better with fish and meat mains. But I don’t think that you come here for the food somehow.

All the other tables were taken by real jazz folk – you know the type, dressed in rather up market casuals and intently focused on the music while jigging along and tapping the table in time. Adoring (and patient) wives at their side…

Anyway. It was an interesting evening for me. I am now partially deaf. My jazz fiend friends thought it was an awesome night. The music was VERY loud. And you were frowned on if you tried to talk during the sets. It really was quite uncomfortable – trying to respect the music (on several occasions the management asked people to keep quiet so that the music could be appreciated) whilst being sociable to the members of my celebrating group. They sure take their music seriously in these parts.

So this is one for serious jazz folk only. If you want a more accessible (both in terms of getting there and back by public transport and in terms of some more middle of the road jazz) then I would suggest Dover Street Wine Bar instead. But for serious jazz players this is, apparently, the bees knees...

The Latest User Reviews of The 606 Jazz Club

The cosy atmosphere and wonderful jazz was ruined by the poor service and management. Our tables and those around us were constantly interrupted and told to 'Shh' by the manager. Seeing as I was unable to hear, over the music, the person across the table from me talking, let alone any of the surrounding tables, I think it is safe to assume the only person who should have been told to 'Shh' was the manager. The manager was severely lacking in people skills which was disappointing as it ruined what should have been a really enjoyable night out.
Added on Fri 14 Nov 2008 at 09:45:11 [report] [respond]
User Rating: 10 / 10

See the best of the National Theatre from your sofa!

I'll see you down the boozer... Brewdog launch their Online Bar
More features and events