Quirky Alert! A pub split in half by an alley offers double the tradition. 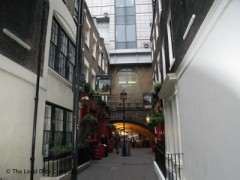 Ads by Google
About: Ship & Shovel serve a variety of traditional pub dishes as well as a selection of vegetarians dishes. They also provide a range of entertainment including Sky TV as well as fruit machines and can cater for private parties in a choice of two rooms - one of which can seat 30 guests and the other room accommodating up to 100 guests upon request.

"Quirky Alert! A pub split in half by an alley offers double the tradition. "

Located in Embankment, around the corner from The Playhouse Theatre, The Ship and Shovell presents visitors with an unusual choice. For this is a pub that comes split in half, across two sides of a narrow alleyway. Connected only by the cellar that runs beneath them, The Ship and Shovell – or the Ship and Shovells – are both fine examples of the classic Victorian pub. So expect the usual gilt mirrors, thick carpets, secret nooks and heritage that appeal to the tourists who wander this area in their droves. And while all that might give cause for visitors to yelp in delight at the quirk they’ve discovered, Londoners yelp too because it is not everyday that you find a pub that is split right down the middle.

A selection of fine ales is the reward for hitting a pub in this no-man’s land area of town, with beers coming from a variety of regional family brewers. The food is also a cut above the majority of pubs of this ilk, although they say that the chips taste better on the left-hand side. Actually, they don’t say that at all but they should because who doesn’t like a layer of mystery on a quirky base?

A charming pub, The Ship and Shovell would be worth seeking out if you’re in the area even if it wasn’t cut in two. But that it is, just doubles the reasons for stopping in for a pint of Dorset ale.