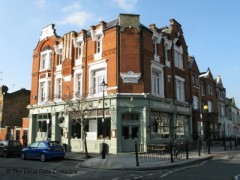 Ads by Google
About: The Morgan Arms is a gastro pub serving British cuisine and real ales.

Situated on a quiet residential street just a few minutes walk from Mile End tube station, The Morgan is in a part of town previously considered to be a little rough round the edges. That seems to have changed in recent years, as the rather grand houses along Morgan Street seem to argue.
It’s 7pm on a Thursday and the pub is already noisy. We stroll over to the dining area, which is separate from the bustling bar, however we spy a patio area with tables and immediately go for the alfresco option.

I’m immediately tempted by the moules Mariniere (£6), and a bowl of plump mussels floating in a garlicky sauce with parsley arrives. The sauce is too tasty to waste, therefore greedy as I am I end up soaking up the best part of it with crusty bread the waitress brings me.

A smooth, rich chicken liver pate (£6.50) comes with a slightly unremarkable sour onion marmalade, but a sweet, thick fig chutney makes up for this.

The duck breast (£17) is juicy and tender, and is accompanied by the same fig chutney we had with the pate. The fondant potato is golden and crispy on the outside, soft on the inside, and a red wine jus completes the dish.

The calf’s livers with roasted cherry tomatoes (£16) are cooked to the point of browning on the outside, and with plenty of sage. They are flavoursome and meaty in texture.

The hand cut chips with flakes of sea salt (£2.50) make me think of Mediterranean meals, perhaps it’s the fact that we’re outside, or that the thickly cut chips seem decidedly continental.

For dessert I choose the vanilla crème brulée (£5), which has a hard layer of caramelised sugar over the top that breaks to reveal a creamy, vanilla-infused custard. Friend’s dark chocolate mousse (£5) is extremely rich and is slightly too big a serving.

After dark, a series of twinkling fairy lights come on, however the patio remains very dimly lit and atmospheric, while the food has been very pleasing indeed.