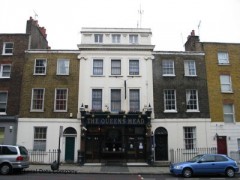 Ads by Google
About: The Queens Head is a pub that serves a variety of traditional English and vegetarian dishes for lunch and dinner. Catering for private parties of up to 60 guests is available upon request.

Stop the presses! Tell your friends, it’s official, we’ve finally found the best pub in London! At least, that’s what the Queen’s Head’s website tells us. That’s some bold claim but we’re not going to get into debate, we’ll take it with a pinch of salt – Maldon probably – and go along with it because having visited on a busy Friday night, with the sun beating down on a lively Kings Cross, we came away without a bad word to say about it.

A traditional Victorian boozer tucked away down Acton Street, a two-minute walk from Kings Cross Station, the Queen’s Head is a bit of a find. Sister pub to Bethnal Green’s Mother Kelly’s beer bar, it naturally goes big on its beer selection. Expect to find the likes of Kernel, Redemption and Camden Brewery on the taps and a vast array of interesting bottles in the fridges. Whiskey is also a thing here too, with a list that ranges from your standard JD to the complexities of an aged Bruichladdich.

Loud and lively, the pub inhabits a relatively narrow space that begins with an area sectioned off by a couple of battered sofas and stretches down with tight tables, sandwiched between wood paneled walls creating an intimate environment. Despite the good beers, ‘curated’ whiskey list and sharing plates (boards of cheese ploughman’s, Spanish meat and pork pies served in huge portions), behind the etched glass windows, lies a city local; whose mixed clientele gives the place an appealing atmosphere.

Pubs are subjective places, nobody can tell us the best pub in London for a fact but the Queen’s Head is in with as much of a shout as anywhere else; a lovely Victorian pub for when you don’t fancy the chic redevelopment vibes of Granary Square.

The Latest User Reviews of The Queens Head

Strangers to the area, we were warmly welcomed at this lovingly restored pub. Someone with an unusually true eye for the importance of conserving historical detail has recreated a little gem in this part of London We did not sample the food but were made to feel welcome with coffee and, later in the afternoon, with a good beer.

I hope this newly reopened pub thrives and is appreciated.

Went there earlier this week because their Thai food is supposed to be nice. Food was cheap (£5) and great tasting - one of the best curries I've tasted in years.

Friendly service. Some 'characters'. Football on the tele. Guinness. Give it a visit.

A friendly old style boozer. Dodgy loos but great atmosphere and real characters. Beer good, especially the Guinness, and lets hope the new "Paris Nord" types moving into the area do not detract from the local pub feeling. It is a real old Victorian Gin Palace-mirrors and tiles- worth a detour to enjoy. Not fancy but fun.
Added on Wed 25 Jul 2007 at 14:27:57 [report] [respond]