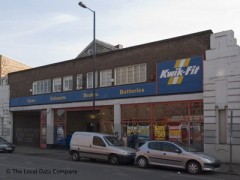 Anon Mum, n10
Added: Jan 2011
I have had 2 encounters with crouch end kwik fit.
Firstly I had reserved 4 tyres for a long distance trip which they assured me were in stock. I arrived to collect my car and found they only had 3. They were very defensive and rude and told me repeatedly it wasnt their fault. (Whose then?) After much complaint they arranged for one to be couriered and made me wait a further 2 hours. They told me how they were working late as a special favour for me.

I complained and was given some vouchers and stupidly returned there for my MOT and service, as I thought it would work out cheaper. They insisted that I needed new brake pads and discs. I asked them if that meant that my car would fail the MOT and they refused to answer. (I didn't realise that I was able to take my car and get a 2nd opinion and quotes from elsewhere). They told me that it was very unsafe to drive with my daughter in it and basically frightened me into parting with over £400. I asked them 5 times - does this mean I fail my MOT? Does this mean I cant drive my car then? And they would not answer the question! I realise I was naive but my point is that unless you know your stuff with mechanics, just beware.

The Invisible Man: scarier than shades and an overcoat