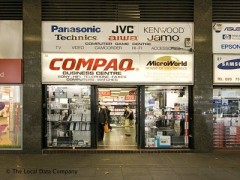 The Latest User Reviews of MicroWorld House Of Electronics

I went to this shop looking for a mouse and they did a very good deal for me. I would recommend this shop to anyone!

The staff were also very friendly and were up for negotiation on products!!

TOTAL ripoff !!! Do not shop here. I also bought a landline phone from here as needed one quickly so didn't investigate enough shops 1st. They charged me £30 more than John Lewis and other good shops as I discovered at a later date.
Blatant crooks !

Not impressed at all with their customer services. Purchased a product with the agreement that it was compatible with a Mac, I returned the item in as-bought condition (dented box) after discovering it was not compatible and was met with aggressive staff who claimed I was lying, suggesting nobody in the store would have told me the product was compatible with a Mac, and directly denied having any such conversation with me.

They then went on to tell me they "didn't like giving refunds on discounted items" suggesting I bargained a better deal out of them, when in fact the product was offered to me at a discount without me even asking.

Eventually got a refund but left the store feeling like I had just been attacked, not exactly the way I would expect to be treated especially seeing as I approached them in such a calm manor.

I bought a Panasonic TG6521 telephone from them. They charged me 55 pounds for it. The same phone with exactly the same specifications is available in John Lewis, Tesco, ASDA and other shops between 39 to 40 pounds. Unfortunately I had checked the price in the other stores only after I had bought my phone. When I went back to them the next day and they also verified the price in all these stores in front of me, I told them that they should give me a refund for the extra amount they charged me. They refused to do anything. I therfore warn anybody who wants to purchase anything from them about their pricing. I paid more than 30% extra for my phone. Anyway I take it as a lesson learnt for 15 pounds.
Added on Tue 16 Nov 2010 at 16:57:33 [report] [respond]
User Rating: 9 / 10