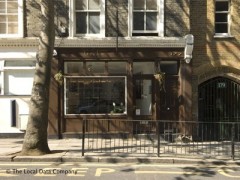 I went in for a haircut a few weeks back and got one of the best cuts I've ever had in my life. The owner was so friendly and gave a great head massage, and the girl cutting my hair was very talented. Her name was Stephane. Def loved the new front store color, and great place to get a great cut.

Have been going here for around 4 years now, very good hairdressers indeed. I got sick of going to hairdressers and being very specific about what I wanted, but leaving with something completely different. These guys really actually listen to what you want and then just do it, working with you throughout - they know my hair and my preferences so well now (I change it drastically quite a lot and am very fussy) that I wouldn't dare go anywhere else now. Plus they look after you really well - there's a garden you can have a ciggy and a glass of wine or tea in while you're waiting for something to set or dye to take, and loads of good, up to date magazines - though I always chat so much with them that I don't need to read to kill the time! Great place, and good value too. Lovely staff. Would DEFINITELY recommend. :)
Added on Wed 28 Mar 2012 at 14:12:25 [report] [respond]
User Rating: 8 / 10

I got the same promotion deal when they came to the business I work for and I totally disagree with the first comment. the hairdressers were friendly, professional gave me a great cut and an amazing colour.
Would defiantly go again and would certainly recommend Gecko Hair Designs to anyone who wants a cut and colour
Added on Wed 31 Mar 2010 at 09:19:50 [report] [respond]
User Rating: 1 / 10

Gecko Hair Design recently introduced themselves to our office in the Kentish Town area. They explained that instead of using up their promotional budget on an expensive advertisement campaign, they were instead using that budget on doing a special promotion which consisted of the following at much reduced prices:
-hair colouring
-hair cut
-hair styling

I was not satisfied with their service at all. I made morning appointments and the lady was late all the time. There can be no excuse that she was just running late from her previous hair cut as my appointment was the first of the day. She was simply always late.

The second time I went there, the staff were complaining about how many of these special offers they'd done - if you're not happy with them, then why would you have offered so many of these promotions in the first place? And when we were sold these offers, all we were told was that we needed to give one weeks' notice for our appointments - but when it came time to book an appointment, I was told that on the particular day I had wanted (with one weeks' notice), there were only a limited amount of promotional appointments per day, and they had reached their quota for that day. I thought the whole point of promoting your service was that you'd want people to come and use your service again - not drive them away!

Anyway, as for the actual hair colouring and cut, even after explaining what I wanted with the, it was not what I had asked for or expected. Needless to say, I will not be going there again nor recommending it.