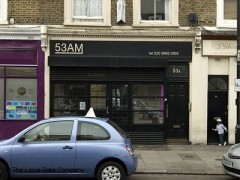 The Latest User Reviews of 53AM

Good haircut, friendly unpretentious staff! Would recommend it to a friend.

I've just got back from 53am now.
I'm usually a person who can't be bothered to leave any reviews but I couldn't stop being angry so, I even signed up to leave a comment for some other Groupon victims for this place.

Looks like everyone went there with Groupon voucher disliked this place from previous reviews.
I was thinking of going back there again if I'd liked the place before I got there.
But I was majorly disappointed and never going back there again and if someone wants to go there, I would tell them to go somewhere else with professional skill and attitude.

I presume they treat Groupon customers badly because this is a cheap deal.
They cut my hair almost within half an hour and they seemed like they just wanted to get it done as quickly as possible. They didn't let me have some time to say any comments on their work. I had to be rush to tell them before they hugely ruin my hair.

They didn't even know what's symmetry when they were cutting my fringe.
My fringe obviously looked one side much longer then the other side but when I claimed that, what he said was it's just the way the hair is and he trimmed a little bit.

Eventually, I had to trim my asymmetry fringe again by myself when I got home.

This place was the worst place I've ever been so far.

Please don't go there unless you are very adventurous.

Had my hair cut and coloured at 53am on sat on arriving I was welcomed by warm and friendly staff in fab little individual salon in the heart of portobello/golbourne area recommended by a friend and all I can say is I left feeling like I had been going there for years thanky all at 53am not only do I love my hair but can't wait to come back soon keep up the good work.
Added on Mon 06 Feb 2012 at 12:32:30 [report] [respond]
User Rating: 1 / 10

I had a Groupon voucher with this hairdresser and I am HUGELY disappointed with my end result. To start with I had emailed my preferred dates to them before Christmas, and never receieved a response. I eventually had to go down to the place myself to book an appointment. They were friendly, and quick to book an appointment for that very weekend (Though I noticed hardly anyone was even booked in to begin with.) and their excuse for not replying to my preferred dates was that they didn't check emails..
I was booked in with [EDIT](whom I'd read about before from other reviews and this made me nervous) she was friendly and polite, however, as soon as I showed her a picture of the short style I wanted, she began to make excuses and ended up convincing me to have it cut only to shoulder length. I told her I wanted a drastic change of style as this was my first visit to a proper hairdressers. All she did was give my hair a trim (very badly) and cut it in the exact style it was already in. She claimed she had given my layers, however I have yet to find them. She has completely butchered my hair, and I am only thankful that I didn't persist and have her cut my hair in the short style I originally wanted, so I can at least now go to a PROFESSIONAL and have them cut my hair properly! I absolutely DO NOT recommend 53AM, they are unprofessional.
Added on Mon 16 Jan 2012 at 23:48:48 [report] [respond]
User Rating: 10 / 10

I also had a groupon voucher and I actually got the days of my appointment mixed up and was actually a day late to my appointment. But they still fitted me in within half hour of me arriving there, which is amazing as I desperately needed a haircut. Justin one of the co-owners cut my hair. He did a really good job, him and the other girl (didnt get her name), was very pleasant and very accommodating. My wash/conditioning with the girl was really good, my head massage was one of the best. The place was clean and tidy. Totally recommend!!
Added on Tue 13 Dec 2011 at 12:00:49 [report] [respond]
User Rating: 1 / 10

I had a Groupon voucher "Wash, Cut, Restyle, Blow Dry and Conditioning Treatment for £26 at 53am (Up to £75 Value)". The booking was done quickly. I received only the haircut and blow dry. Once there I asked for lots of layers and an inch cut of the length. Kate my hairdresser said layers can't be done on medium long hair so she just give me a trim. When she saw how unhappy I was at the end she cut something at the back. She was mute the whole time she cut my hair and ignored every time I asked her to give me layers. She didn't let me look at the back and home I noticed I have a gap at the back of my head. I'm furious with them since this was meant to be a service given by a stylist not an amateurish hairdresser. I still want the haircut I went in for, but now on top I have to correct the gap she left at the back. Very disappointed with the service. Avoid Kate a tall red haired girl. hope the rest of the staff are more considerate. The place looks a bit dirty and could use some floor and wall washing, plus a desk cleaning. The staff could be educated to me more service oriented and friendly and take into account the client's requests!AVOID this place!
Added on Sat 12 Nov 2011 at 11:50:04 [report] [respond]
User Rating: 5 / 10

Call me mr cynical but isn't it a coincedence that all 3 of the 'customerd' who've so far reviewed this salon all joined on exactly the same day and have posted exactly the same number of reviews each?
Added on Fri 23 Sep 2011 at 08:20:20 [report] [respond]
User Rating: 10 / 10

Really friendly and laid back, trendy without being scary, fast and professional - and very reasonable price, great to have a local place to go to, no more schlepping into the west end for £70 cuts!
Added on Mon 01 Feb 2010 at 23:31:01 [report] [respond]
User Rating: 9 / 10

I agree with the other poster. The staff are expert and friendly without some of the pretentiousness of other places in the area or the vile atmosphere of the dreaded Base Cuts.
Added on Fri 29 Jan 2010 at 10:35:05 [report] [respond]
User Rating: 8 / 10

I regulary use this hairdressers as it is freindly and fun. It also has fantatstic staff with bags of experience and talent. I cannot recommend this enough, must be tried to be believed.
Added on Sat 16 Jan 2010 at 11:47:47 [report] [respond]