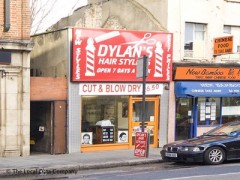 The Latest User Reviews of Dylan's

Add a PhotoSubmit a Top TipWrite a Review
User Rating: 4 / 10

Gordon, Wandsworth
Added: Jun 2018
Had a haircut 27 June. Regular user for last 15 years. On the last 2 occasions I've had to return the following day as cut uneven. Not a complicated cut; No. 2 on top and No. 1.5 back and sides, but on both occasions one side was uneven due to No. 2 blade being used. When I went back today I was told nothing was wrong, and when I enquired why one side was uneven the manager said I probably slept on that side! He said that the No. 2 wasn't cutting anymore off, and I told him it was meant to be a No. 1.5 blade. He changed the blade and amazingly the uneven cut had disappeared! When I said that it wasn't my imagination and that this is the second time in 2 months this has happened, he suggested I should find another barber!! The problem with this barber's is that all the staff have very little grasp of English, and the manager has no grasp of customer care or customer satisfaction. In future I'll be taking my business to Vaki's on the other side of the road. You have been
Added on Thu 28 Jun 2018 at 13:06:07 [report] [respond]
User Rating: 10 / 10