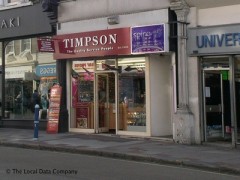 Tweet
About: Timpson provide a number of services including shoe repairs, key cutting and engraving in certain outlets.

The Latest User Reviews of Timpson

The rating for this review is no longer counted due to a response being added, see below for the official response.

Sini P, Putney
Added: Mar 2016
I first visited this place by a recommendation by another business. They changed the battery to my two watches, and for the second watch I bought a lifetime guarantee for battery changing. The second watch didn't keep time after that, so I brought it back and they promised to fix it. They never came back as promised, so after six months I went to ask about it. They had replaced a part, but after that all hands didn't fit back in. I wasn't charged for this, but the watch never kept time after this - the lifetime guarantee turned out to be useless. Later the other watch lost a standard part in its bracelet and I asked for it to be replaced. They couldn't help. Then I went to have a battery replaced for a pocket watch. They didn't know how to do it. I don't think I will be visiting them again.

I would firstly like to apologise for the fact you were not fully satisfied with the service of the branch. I would certainly feel the same way if I had been in your position. Having only recently acquired the managers position of Putney Timpson, I very much doubt it was I who served you initially. In saying that, I invite you back to the branch to identify all problems stated and agree on a suitable solution.

The service you received is not indicative of all our colleagues. I, for one can assure you of this. I have also forwarded your message to our head office to investigate its origin.

I very much hope this message finds you.

I thought that true service had gone out of the window ages ago - it is generally a "thanks for the money, now sod off" attitude that we find in shops and the "service" industry. However, I was absolutely delighted by this man's cheery attitude & willingness to please. WE NEED MORE PEOPLE LIKE THIS!!!! Give him a raise, put him in charge of training others to show them that treating the customer as king is not demeaning but a far better way of boosting your trade than all the money spent on fancy advertising etc..

Thank you for your kind words. I have recently acquired the managers position here at Putney Timpson. I do hope you continue to enjoy the fabulous products and services we offer.