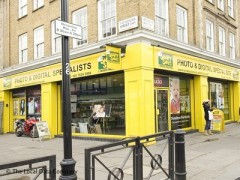 Tweet
About: Snappy Snaps offer 1, 3 and 48 hour film developing. The minimum charge is three pounds ninety-nine. They also do enlargements and reprints. In addition they also sell cameras, picture frames and photo albums.

Heather, Pimlico
Added: Nov 2015
I went in to have 29 photos printed and framed in custom mounts and frames. The man pointed me to ready made frames and told me custom would be "very expensive". I didn't like the ready made frames, particularly the poor quality mounts inside. He told me that they didn't sell mounts, even though they had them on display. I tried to clarify what they could do, but he said it was expensive. I expected to spend about £1,500 that day. But he was difficult, rude, and hard to understand and shouted at me in front of others. I left spending nothing,
Added on Sat 28 Nov 2015 at 13:11:10 [report] [respond]
User Rating: 1 / 10

Michele, Pimlico
Added: Nov 2015
I had some large photos printed here and bought some frames for the pictures. On collecting, I found they had put the pictures into the frames. I had not asked for this. When I got the frames home I realised they were too big for me to travel with.
I took the frames back the next day & was told that because they had been opened, I could not return them - even though the staff in the shop were the ones who had opened the frames.
The manager was extremely unhelpful and rude. I would suggest they:
1. Only provide the service requested
2. Improve their customer service
3. Be fair to customers

I have mixed experiences with this place. The lady that works there is always lovely and the pictures and prints are typically in order and developed promptly. However, the man (manager/owner?) is so very very unpleasant. He is rude, unhelpful and inconsiderate. Example: being waved off by him with the most unpleasant manner, it was 08:35 (opens 08:30 acc to website) bc did not feel like opening the door for us. Not helping with door even though he was stood right there next to it and had buggy, two kids and bags. Always rude and very 'snappy' indeed.
Added on Mon 24 Aug 2015 at 19:49:14 [report] [respond]
User Rating: 1 / 10

Abrupt, arrogant and lacking in knowledge. Forced us to buy larger, more expensive photographs for visas when actually standard sized photographs were required. This could actually be dangerous for legal documents like visas.