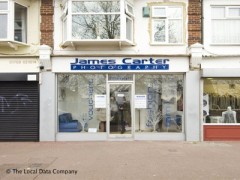 We we’re given as a gift of Couples Makeover experience for our anniversary, via Virgin Experience and were initially disappointed as I had hoped to be able to go to a more local studio in Kent, however after the photoshoot we both could not have been happier.

To start the service and helpfulness of the receptionist Kelly was exceptional as without her we would still be on the A127 (as we got lost and very stressed, but we’re directed clearly to the studio, with cups off tea waiting for us on arrival). My wife who hates photos really enjoyed the whole experience and our makeover artist Simone was brilliant even took the shine of my head!

We were both lost for words of appreciation with the photographer, Ash took time to pose and put us at ease, it was a truly fun day and that’s even after seeing the price list! Which as expected was expensive but not as expensive as I'd have thought given the endless effort that had gone into the day by all the staff!

We returned to view the photoshoot with James Carter himself the next day, and we’re delighted with the presentation and packages that we’re offered as we we’re able to purchase a lot more than we though we could afford.

We would certainly recommend a Couples Makeover Virgin Experience!

pictures promised within 8 weeks. 12 weeks later the prints arrived, battered and poor quality - not even a full set!! Photographs put in cheap cardboard frames, I could have bought better from Ikea!

In hindsight I should have taken notice of the fact they overran by two hours and kept us waiting, not once but twice. For the money paid I expected a high standard of service and product - neither of which were delivered by James Carter Photography.

tina, london, Emerson park
Added: Dec 2010
The service at James Carter Photography is 110 per cent excellent!!
I have my picture taken by James 15 years ago and i returned just 3 month ago to his studios and I was really pleaase with my pictures, I think the whole team is very professional and James Carter photography skills are MAGNIFICENT !!!
Thank you very much for such a great experience!!!!!!!!!!!!